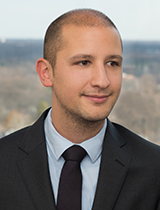 As a Thematic Research Analyst, Zach explores economic shifts and evaluates their impact on the global economy.

Prior to joining Chevy Chase Trust, Zach wrote economic master plans for the European Union member governments of France, The Netherlands, and Luxembourg. He was the chief researcher for a book on the topic of governance authored by Jeremy Rifkin. He also worked as a Parliamentary researcher for the United Kingdom’s House of Commons.

Zach was awarded an MSc in European Union politics from the London School of Economics and a BA in political science from Northeastern University.